Minneapolis NAACP President Nekima Levy-Pounds talks to a crowd at a Justice for Jamar Clark rally outside the Hennepin County Government Center.

NAACP Minneapolis President Nekima Levy-Pounds told the crowd outside the Hennepin County Government center if there is no justice in the Clark case, Freeman should expect to be voted out of office.

“Mike Freeman if you do not uphold the law you will be out in 2018. Just like Anita Alvarez was out in Chicago.” Backlash against the way Cook County State’s Attorney Alvarez handled the police shooting of Laquan McDonald got her voted out of office this month.

Freeman, whose office is near where the rally took place, recently said he would decide whether to press charges in the case himself instead of leaving it up to a grand jury. His decision is expected soon.

Levy-Pounds said the actions of the Minneapolis police enables more racism. “We see white supremacists and the Ku Klux Klan coming out of the woodworks in Minnesota just like they did in Mississippi in the 1960s.”

Photos in slideshow below by Benjamin Gross 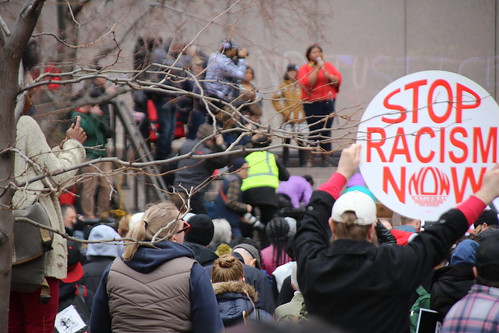 “We deserve to use our voices and to stand up for what we believe in, free from police violence. Free from intimidation. Free from discrimination and free from incarceration,” Levy-Pounds told the crowd to much applause. She said anger about the video increased turnout at Saturday’s rally.

“I regret that some of the images in a video that the Minneapolis Police Department released yesterday do not reflect that the large majority of the people who protested at the Fourth Precinct last fall did so peacefully,” said Hodges in a Facebook post Friday night. “I’ve expressed my opinion to Chief Harteau, and she understands.”

Levy-Pounds questioned why the Mayor did not know about the video until it was released, but said acknowledging a wrong is “an important first step.”
“Hopefully she learned from her major faux paus,” she told The UpTake before speaking to the crowd. On stage, Levy-Pounds was adamant “Mayor Betsy Hodges, you need to get your act together.” “We’re not going to tolerate people in office who are not doing what they claimed they would do.”