There were no pitchforks. No unruly mobs. And no paid protesters. There was also no Congressman Erik Paulsen. While organizers of the “with or without him” town hall meeting really did want Paulsen to attend on Thursday night, they were prepared for him not being there. In his absence, they turned the event into an orderly discussion of the issues that the crowd of 600 wanted to ask their congressman about.

Paulsen has voted many times to repeal Obamacare and recently suggested that Health Savings Accounts would be part of the solution to replace it. The problem with Health Savings Accounts? You first have to have money to put it into the savings account. That savings is not enough when you get a serious disease. “The Affordable Care Act saved my life,” said a teacher who lives in Paulsen’s district who had been diagnosed with cancer. Her medical bills in one year were $250,000. One chemotherapy treatment was $20,000. “When he talks about HSA and me saving on my teacher’s salary, the ability to get my treatment. That’s wrong. Shame on you!”

She held up a paper with the word shame printed on it. Many others in the audience held the same signs.

Another man was upset that Paulsen had voted against requiring President Donald Trump to release his tax returns so people could see if he had a conflict of interest in his dealings with Russia. When he mentioned a Republican from Maine — Sen. Susan Collins — was open to using the Senate’s power to subpoena Trump’s tax returns, the crowd cheered.

Details of resolutions and bills Paulsen had recently voted on were projected on a screen. Attendees were asked to discuss the issues and then vote on them. One resolution allowed Congress to override rules from federal agencies, including those with scientific expertise. Holding up a green card indicated you were for it. Holding up a red card indicated you were against it. The audience was a sea of red. Paulsen had voted for the resolution.

Videos of the town hall

Video at top: People discuss issues Rep. Paulsen has voted on
Video below: Many constituents want to comment

It was a school night, but that didn’t keep young people away from the meeting. A boy said he was against building a wall on the Mexico – US border. “If not for immigration, most of us wouldn’t be here.” He called on Rep. Paulsen to stop the wall.

A 14-year-old Wayzata High School student was concerned about Trump rescinding rules that protected transgendered students from discrimination. “One of my best friends is transgender,” she said. “I just want to tell Erik Paulsen that we have to show people love regardless of their gender or their sexual orientation, and all people. So please just… everybody love.”

While the event attracted a lot of DFL activists, it also had a fair number of people who hadn’t been involved in politics who said they were concerned about what was suddenly happening to the country. Kelly Guncheon, who isn’t affiliated with any party, was one of the main organizers of the event; he said, “I’m doing this on my own. My wife and I actually started talking about this three weeks ago in our living room and since then we’ve had hundreds of volunteers and good response and a network of people who have spread the information.”

Guncheon, like many other constituents, tried to contact Paulsen in recent months about meeting face-to-face in a formal town hall meeting to discuss the issues — something Paulsen hasn’t done for six years. But despite daily calls to Paulsen’s office, the Congressman would not commit to any public meeting.

Paulsen’s office says he has held “more than 100 in-person town halls, telephone town halls and Congress on Your Corner events.” Video evidence of Paulsen’s in-person town halls is scant. A search of YouTube found the last one was in 2011. Paulsen has held two tele-town hall meetings this year; these consist of thousands of people in the district selected at random and dialed up for a big conference call. Constituents complain that they aren’t notified about the calls in advance, that the questions are screened, and there’s no followup.

“It’s difficult I think to represent people if you don’t know them, you don’t talk to them,” said Guncheon. “Generally people fear the unknown, and because he doesn’t know his district, he’s buying into the baloney that town hall meetings are raucous and somehow dangerous to him.”

“We’re not there because we hate him as a person. We just have problems with the way that he’s voting and we’d like an explanation.”

Guncheon hopes that explanation may come in the future. Audio and video of the meeting, along with written comments from the audience, are being sent to Paulsen with a request that he reply. Perhaps to remind Paulsen of that, many of the people who attended the town hall plan to hold a demonstration outside his office on Saturday.

Below: Photos of town hall by Patricia Hauser 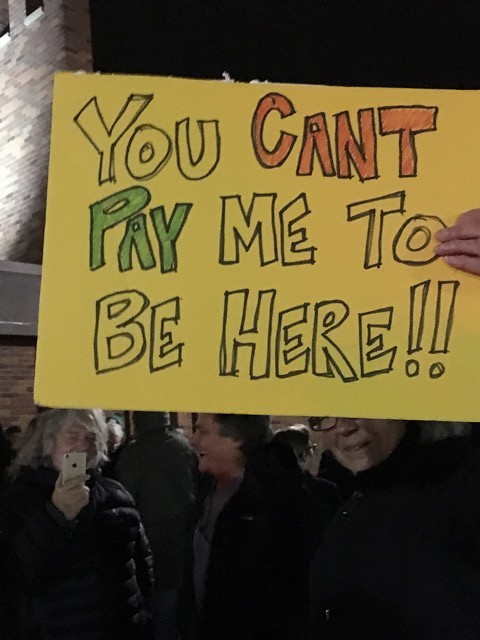